Rating the ATP's best forehands and backhands since 1990

Who has the best forehand and backhand in men’s tennis? In this post, I make a first attempt at tackling this question using data from the Match Charting Project (MCP).

The fundamental idea is to look at a single shot at a time. Say Federer hits a forehand off a Djokovic backhand. One of three things can happen: Federer (1) returns the shot, (2) hits a winner, or (3) makes an error. I am not distinguishing unforced and forced errors here to keep it simple.

When considering the likely outcome, there are some important factors. Of course the outcome will be driven in part by Federer’s skill on the forehand. But the opponent also plays a role: the incoming backhand shot may put Federer under pressure. And it’s likely that it’s harder to hit a winner against Novak than against most other players. So, my current model looks roughly like this: \(z = \textrm{shot_quality} + \textrm{incoming_shot_quality} + \textrm{opponent_defense} + \textrm{intercept}\)

Feel free to skip this section if you’re not interested in the details! The scores $z$ here are the log odds relative to the base outcome (“returned”). The log odds are given by:

To make things more concrete, let’s look at Federer hitting a forehand off a Djokovic backhand as an example. The intercept for a forehand is -2.72 for winners, and -1.53 for errors. Adding the zero log odds for the base class, the complete $z$, as a vector, is equal to $[0, -2.72, -1.53]$. To turn this into probabilities, this vector is passed through the softmax function to give 78% probability of shot being returned, 5% probability of a winner, 17% probability of an error.

How does playing Novak affect things? It turns out that Novak reduces the log odds of hitting a winner off a forehand by 0.18, and leaves the error probability unaffected. Also, Novak’s incoming backhand reduces the log odds of hitting a winner by 0.25, and the chance of an error by 0.11. Putting all this together, the log odds for the winner are -2.78, and the error -1.49, so we’d expect Federer’s forehand to be returned 78% of the time, a winner 5% of the time, and an error 18% of the time. As you’d expect, it’s harder to hit winners against Novak!

One more detail: I won’t explain this in any depth here, but I also make an attempt to correct for the sample of the MCP using post-stratification. I might talk about this more in a future post, but I think there is already plenty of detail in this one for now.

Calculating shot quality from the model

Having estimated these coefficients, how can we find the player with the best forehand and backhand? I think a neat way to go is to consider a duel: if a player gets into a forehand-forehand duel with an average player, how often are they expected to come out on top? Using all matches charted for hard courts since 1990 and limiting the players to those with at least 10 matches charted, we can do this and produce the following plot: 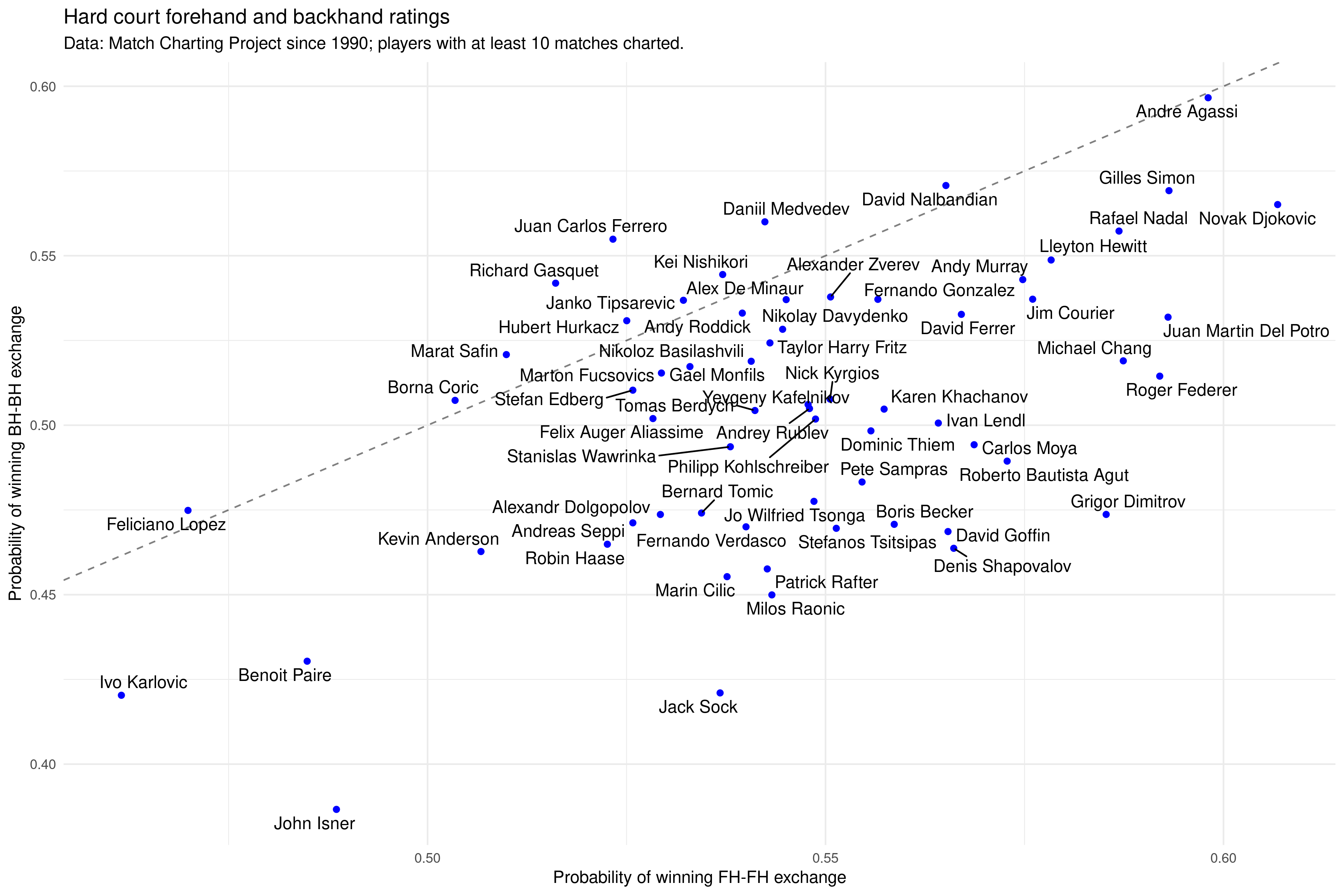 Here are some notes on the plot:

In summary, I hope you’ve enjoyed this first look at my attempt to rate player’s shots with the MCP. I’ll admit that I am not entirely sure about some of the modelling decisions I’ve made yet, and whether my adjustments to the sample are adequate. Nevertheless, I wanted to share the results, and I hope the plot could lead to plenty of interesting discussions!